The Projection-Based Image (PBI) is a novel device-assisted security feature that utilises a clear window of a polymer banknote. Without illumination, the window appears as a mottled noise pattern; however once illuminated using an external light source a high contrast image is projected onto a background surface. The feature provides a means of banknote authentication by various users that is simple and quick to use with little or no education. Any focussed light of sufficient intensity is able to illuminate the feature, including a smartphone flashlight, LED light and even sufficiently bright sunlight. The feature generates this effect via a complex array of microlenses that refract light. The refraction generated by the microlenses, which is referred to as caustics, is similar to the patterns produced by sunlight shining through rippling water onto the bottom of clear pools of water. Caustics are the envelopes of light rays produced by refraction or reflection of light from a curved or complex surface. The high efficacy of the projected image is formed from a collection of Gaussian-shaped caustic profiles, each arising due to light refracting through a single microlens. The microlens arrays used to create the image are generated using a ground-breaking algorithm which also takes into account the requirements of banknote manufacture, including limits on lens thickness.

The PBI feature has been developed by the Reserve Bank of Australia and The Walt Disney Company – Disney Research Studios. While it is not currently on a circulating banknote, the technology has been proven, as banknotes incorporating the feature on the new $100 denomination of the Australian Next Generation Banknote (NGB) series were successfully produced as part of a process capability trial. The trial demonstrated that the feature could be incorporated into a banknote design and produced at production volumes and speeds. It also determined that the PBI feature had robust adversarial and durability properties.

The feature was available for use from 1 January 2020.

Australia (on a test banknote)

Device-assisted features, such as fluorescent inks, are commonly included on banknotes to provide surety about a banknote’s authenticity. These features are made visible to the user via the use of a simple tool, and provide an immediately obvious and describable effect. While the availability of UV lamps has made fluorescent inks popular at the retail level, these inks are now widely available, reducing their efficacy against counterfeiting. Diffractive optical elements (DOEs) require illumination with a laser pointer to confirm authenticity, however users can find the effect difficult to see or understand. Smartphones are an ideal tool for authenticating banknotes, and PBI is a new security feature that utilises this functionality. The PBI is an array of microlenses embedded in the window of a polymer banknote that projects a high-contrast image when illuminated by any point light source. The optical image can be easily observed by, and explained to, the public.

The PBI feature has undergone rigorous adversarial analysis testing to ascertain the security of the feature. The algorithm used to develop the microlens arrays has been formulated such that this would be difficult to re-originate and could only be done with specialised knowledge and equipment, along with the capacity to protect the exposed lens array. In terms of security, the feature derives some of its resistance to counterfeiting from the fact that the projected image cannot be discerned from simple inspection of the window area. This has been achieved by ensuring the lenses that create the bright areas of the projected image are distributed across the lens array – this creates a window that appears as a mottled noise pattern under normal viewing, with the image only appearing via external light source projection. The results of the adversarial assessment indicate that PBI provides a strong barrier to counterfeiting at all levels.

The PBI feature was presented at the 2018 Optical Document Security conference (https://www.reconnaissance.net/optical-document-security/about/review-2018/). The technology was favourably received by the attendees, with the feature being highlighted in the post-conference review. The feature has also received positive responses from focus groups conducted to help assess the feature, as well as leading polymer substrate suppliers such CCL Secure and De La Rue. These groups and organisations felt that the feature displayed excellent efficacy for the intended user. The feature has also undergone a security assessment and shown that this would present the counterfeiter with additional challenges. The PBI has also successfully passed the Reserve Bank of Australia’s durability tests indicating the feature is capable of withstanding circulation wear and tear. The feature remained highly functional even after being exposed to chemicals tests such as the washing machine, environmental tests such as heat and humidity, and physical tests such as abrasion and crumpling. 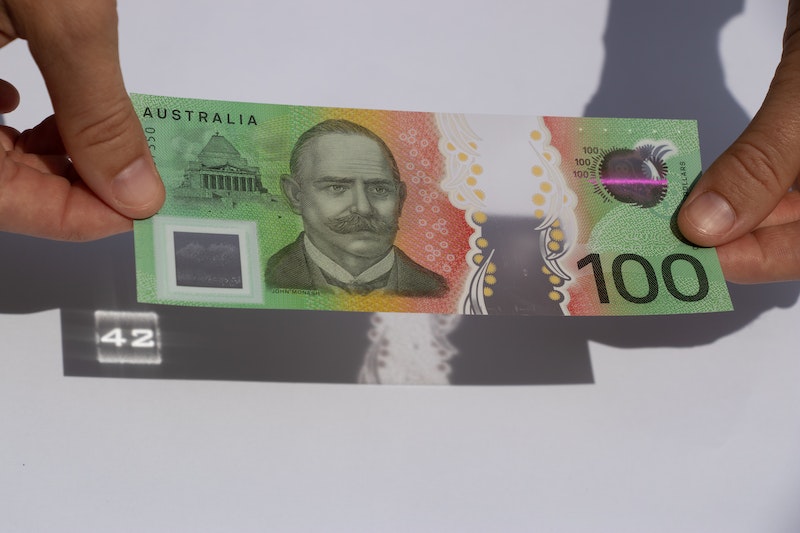