The Royal Mint’s revolutionary innovation, the High Security Feature (HSF), is the result of years of research and development. It was developed initially to make the UK’s new 12-sided £1 coin more secure, as the previous ‘round pound’ had been in circulation for 34 years and had seen counterfeit rates of 3%. The new coin had to satisfy the requirements and acceptance of both the public and the cash-handling industry. It has a unique and innovative combination of overt and covert security features that work together to make it the most secure circulating coin in the world.

The covert HSF, which was developed by The Royal Mint’s new product research team in collaboration with industry partners, brings banknote-level security to coins for the first time. The secure taggant is placed within the plated layer of a coin, is machine-readable at high speed and can be used to measure and track counterfeits. It is more difficult to counterfeit and easier to detect than any security feature before it. Furthermore, because the taggant is contained throughout the plate, wear is not a concern with the coin becoming unfit for circulation before any loss of HSF signal.

HSF is backed by the quality, choice and flexibility that are the hallmarks of The Royal Mint, ensuring a cost-effective currency system that meets each customer’s market needs without compromising on finished product.

Date the innovation was first implemented

The High Security Feature has been incorporated into the one pound coins of the United Kingdom and the coins of a number of other countries across the globe. For confidential reasons, we are unable to name the countries.

The characteristics of The Royal Mint’s High Security Feature (HSF) are such that many details must remain secure and confidential. There are no images to support this nomination as HSF is a covert feature within the plated layer of a coin. It is a machine-readable covert security feature equivalent to a level 3/4 banknote feature (see Appendix 1), creating secure and efficient coinage fit for the 21st century.

The technology is based on well-established banknote security principles. There is a secure taggant within the plated layer of the coin that, when illuminated by a specific light source, will return an emission that can be detected and provides a binary response as to authenticity. As a taggant, this can be used in a number of ways to measure and track counterfeit levels in the future, and is detectable at high speed using coin sorting machines.

The Royal Mint believes that its High Security Feature is the first of its kind, offering banknote-level security to coins. This revolutionary application of HSF in coinage can be used for multiple purposes such as counterfeit prevention and monitoring, authenticity checking at borders, denominational monitoring and audit or as an insurance against counterfeit threat. As such, detection can be incorporated at different points through the cash-cycle.

High-speed sorters, such as the Scan Coin ICP9, can be employed at cash centres and central banks. Manufacturers have seen this as the most common application for HSF and have different options, all capable of detecting successfully at the high speeds used in these machines. Additionally, there is the option to include detection at the vending level by incorporating dedicated sensors. The micro sensor has been developed for HSF specifically with custom hardware and optics.

Differentiation of new feature, product, or innovation from existing ones

The banknote-level security offered by HSF enables issuing authorities to develop their cash management system as appropriate and, as such, The Royal Mint offers bespoke solutions to maximise the availability and credibility of cash.

HSF in coins is not just a superior product; it is a full end-to-end currency system, from specification and production, to cash cycling, detection, validation and removal. It has all the necessary strengths to carry the reputation of a nation and its economy. HSF can be applied at various levels of the cash cycle, from vending, gaming and Point of Sale, through commercial banks and cash centres, to the central banks themselves, making HSF a complete and secure currency system.

HSF is an innovation that has the potential to completely revolutionise the currency industry. Plated coins now offer greater security at lower cost, challenging the requirement not only for homogeneous coins but also lower value banknotes.

Improvements in counterfeit detection are demonstrated in a recent seizure of new £1 coins.

The Royal Mint’s High Security Feature (HSF) has already proven itself in the field, quickly and efficiently identifying genuine coins. In the UK, local police seized a number of £1 coins as part of an arrest. They were discoloured and had been exposed to a corrosive substance which was often used as a method to mask counterfeits. Prior to HSF, normal process required that the coins must be submitted to The Royal Mint laboratories for verification, taking precious time and resource, sometimes with suspects being charged.

With HSF in the new £1, local law enforcement has now been able to use a hand-held detector to check the damaged coins and ascertain in seconds that the coins were genuine. This accurate and speedy identification meant that there was no need to submit the coins, taking valuable time of both the exhibits officer and Royal Mint laboratories, and no charges relating to counterfeiting, that would have later been dropped, were made against the suspect.

Following the launch of the new £1 coin in March 2017, the message on counterfeiting has come across strongly, with 91% of the general public aware of the reasons for the new coin.

Feedback from central banks around the world includes:
“You really succeeded in presenting something of high quality.”
“I would like to congratulate you; our Mint would be highly interested in learning more, especially features such as innovative security elements.”
“Congratulations to The Royal Mint for great innovation in the coin industry.”
“It’s indeed a beautiful coin with advanced security features.” 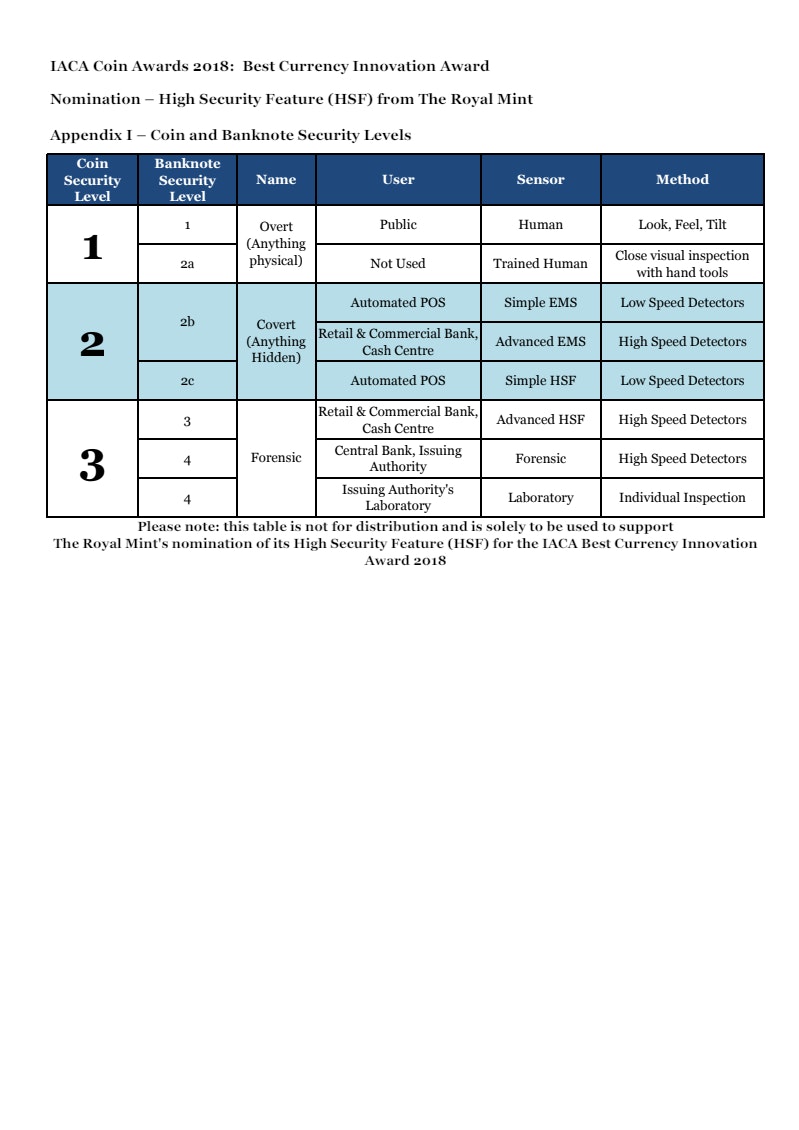 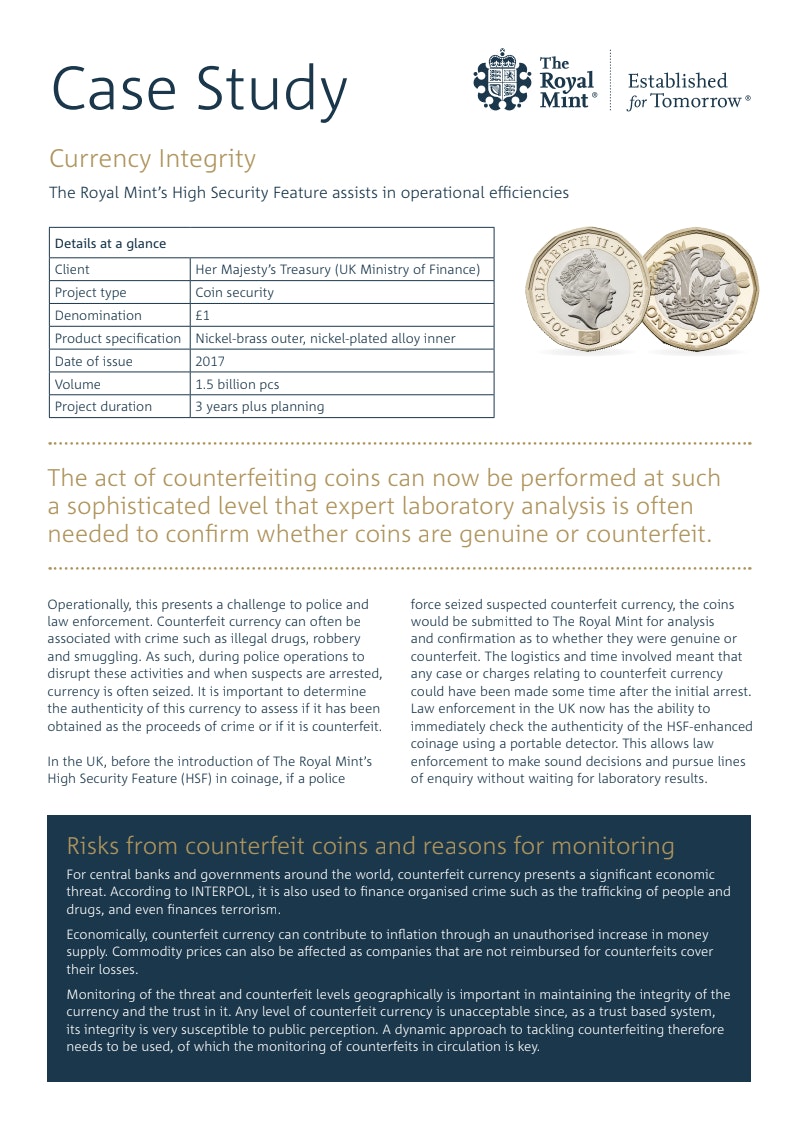