WHY: Recognizing that hologram technology was largely antiquated, and currency protection solutions did not offer enough differentiation to the observer or authenticator, Nanotech saw the need to develop a new advanced OVD platform. The platform consists of three categories of optical structures: micro-structures, sub-wavelength plasmonic nanostructures, and hybrid of the two.
WHAT: Combining micro-structures and nano-structures augments both the micro-structure and nano-structure effects by controlling the light at macro and nano scales. Forming nanostructures along the 3D contour of a given micro-structure however is not trivial and took NTS scientists years to solve this issue (patent number WO/2019/140527 ‘NANO-STRUCTURES PATTERNED ON MICRO-STRUCTURES‘) . Doing so creates a completely new optical platform for banknote security feature with multi-colour imagery, full parallax depth effects and moving animations.
HOW: Origination of such exotic hybrid structures is extremely difficult and complex. Suffice to say, Nanotech has invested years, over $20 million to develop this revolutionary, patented nanotechnology platform including owning and operating their own multi-stage 100kV EBL machine in a class 100 cleanroom. Nanotech’s processes have enabled the company to produce these theoretical structures and manufacture them in what is likely true world-first.
The micro and nano-scale banknote structures have many advantages over current lens-based optics, including 10X-20X thinner features, compatibility with magnetics, overprint, and multiple application mediums as stripes, threads and labels.

Date the innovation was first launched.

NEXT-GEN SOLUTION: The current state-of-the-art overt security features found on banknotes rely on diffraction based OVDs, which are largely holographic in nature. Mainstream consumer use of holograms has lowered the cost of these tools compromising the security of these features. Our hybrid structures require custom, expensive, highly advanced technologies in Class-100 cleanrooms and accessibility to such equipment is not open for consumer applications. The platform itself distinguishes it from other initiatives.
NEW FEATURES: Our innovation is based on tailored plasmonic nano-structure arrays, each exhibiting an independently unique structural colour, adjacently placed along the contours of a microstructure to form striking effects. A single thin layer of arrays can be arranged to produce multiple overt features. These nano-optic features or hybrid structures are not available anywhere else and is a multi-fold improvement to available currency authentication solutions.

ENVIRONMENTALLY SUSTAINABLE: No inks or harmful chemicals required for production, all colours appear organically because of natural light manipulation by the hybrid nano-structure combination. Using a single origination and thus a single embossed/cast film minimizes the environmental impact.
SAFE: Since dyes, pigments or controlled substances are not used, there is no question of toxicity or reactions. We understand that currency comes into contact with every member of the public and must remain in circulation for decades.
NATURAL INSPIRATION: This technology was inspired by nature, and perfected by science. With their beautiful colouration and structural complexities, the shimmering wings of the blue morpho butterfly have long fascinated scientists. A series of microscopic nanostructures — holes 1,500 times thinner than a human hair that can trap or reflect a single wavelength — interact with light to produce the butterfly wing’s shimmering effect. This platforms’ materials with nano-sized holes create the same effect.
IMPROVED EFFICIENCY: These hybrid nano-scale structures are more efficient than traditional grating and lens-based optics, as low aspect ratios lead to mechanically robust structures in thinner material layers. Colours produced by this platform are the most vivid in the industry and effective at capturing the public’s attention.

The Bank of Canada is interested in novel optically variable security features to supersede conventional holographic effects. Movement-, depth- and float-effects, as demonstrated by micro-lens based features to date, are interesting candidates. The integration of such novel effects into a banknote design also requires substantial design freedom and limits on feature thickness, particularly for a polymer substrate. Nanotech’s KolourDepth™ sample demonstrates potential in achieving such effects, with two distinguishing features, in more than one colour and as a thin foil.” – Ted Garanzotis, Bank of Canada (Senior Director – Research, Currency Department)

When I saw the KolourDepth feature for the first time, its 3D depth and vivid colour immediately stood out as striking and memorable. Learning that it was created with a new manufacturing technique using nano-optic technology gave it an additional layer of security. – Laura Wheeler, Portals (Strategy and Marketing Director)

Image of the innovation 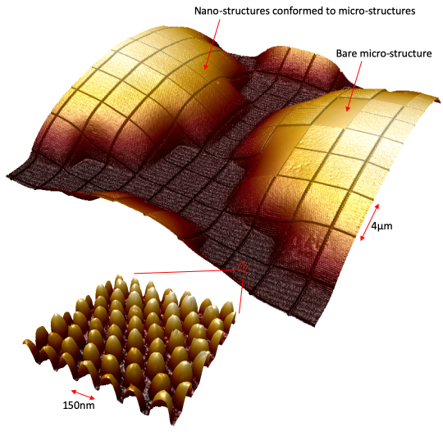