The patented KINEGRAM® APL, which stands for Applied Patch Label, is a technology that revolutionizes the process of foil application in banknote printing. As a result, it opens up new possibilities for the creation of window banknotes as well as the transfer of other, novel security features onto banknotes. The new process has been fully tested and already proven in industrial application projects. For the first time, banknote printing works can now create window banknotes in their own premises with KINEGRAM® APL, the new process working as follows: Using any of the industry standard hot stamping machines such as an OptiNota H (KBA NotaSys), a FSA Foil Commander (Gietz) or a Foiljet FBR (Steuer), a laminate patch is transferred onto windows in the printing sheet (paper or composite substrates). The windows are created either in a separate step or in an inline process before the foil application. After removal of the foil carrier, the laminate patch is sealing the banknote’s aperture. The KINEGRAM® APL process has been extensively tested and optimized. It is assured that the physical properties and circulation strength of the resulting security features comply with the most rigorous industry standards, including the existing durability requirements for window banknotes and using the Euro as a benchmark. The revolutionary KINEGRAM® APL foil application technology was engineered to perfection and tested successfully on a large-scale industrial level.

Date the innovation was first launched.

The KINEGRAM® APL technology marks an important advancement in the process of foil application for printing works, who are gaining back process control and are empowered to create security elements that they have previously been unable to access. For example, as a complete novelty in the industry, banknote printers are in a position to manufacture window banknotes in their very own premises by using this technology. This process revolution completes the available possibilities for using window features by giving new degrees of freedom to central banks and banknote designers in determining the optimal manufacturing sequence and positioning of elements.

KINEGRAM® APL was developed with the foil application process in mind. It revolutionizes how foil is applied onto banknotes for specific elements, such as window features. This allows banknote printers for the first time to produce window elements in their very own premises. The foil itself is manufactured by LEONHARD KURZ in a unique way that enables the innovative application process. While banknote printers don’t need to invest in new equipment, but can make use of their existing hot stamping machines, they gain increased control over the banknote manufacturing process as well as the ability to offer an enlarged range of products to their clients.

KINEGRAM® APL is a process revolution in banknote manufacturing in two ways. Firstly, it increases process control and value creation for the printing works, marking an important step towards improved efficiency and freedom of choice in the banknote manufacturing process. It allows printing works to independently create security features, whose manufacturing either previously depended on the paper mills, or was wholly impossible. With KINEGRAM® APL technology and its uniquely manufactured foil, banknote printers now have access to an increased know-how, production capabilities and product range. Secondly, the KINEGRAM® APL technology can form a basis for future innovations, such as the transfer of electronic features onto banknotes. These in turn have the potential to not only raise the security of banknotes, but also to promote new ways of process or circulation control. A novel foil application process could potentially evolve into a new manufacturing paradigm.

The KINEGRAM® APL technology was received very well by the public at Intergraph 2019 in Copenhagen. (Especially the new Marketing banknotes Herman Ottó / HBPC)

Image of the innovation 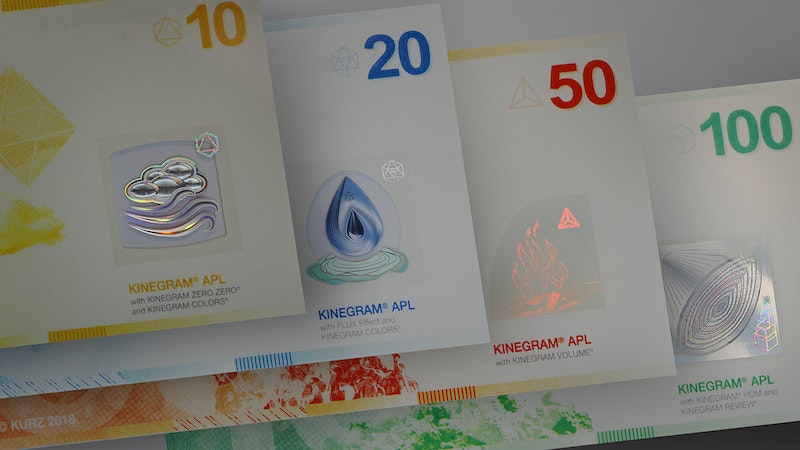